The Searle Company Limited (PSX: SEARL) was set up as a private limited company in 1965. Several years later, in 1993, it was converted into a public limited company.

The company manufactures pharmaceutical and other consumer products; International Brands Limited is its holding company, owning over 56 percent shares of the company. 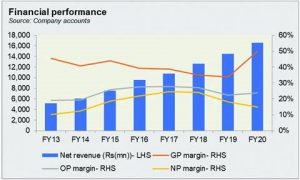 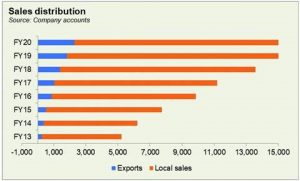 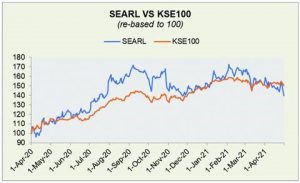 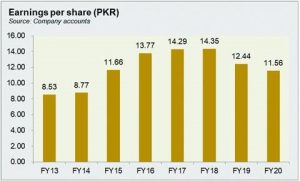 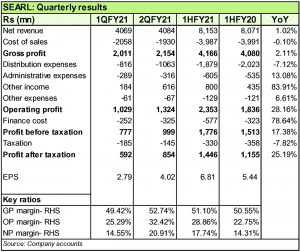 The Searle Company Limited has seen consecutive double-digit growth in its topline since FY14. Profit margins have seen little changes over the years.

Unlike the s two years FY15 andFY16 where topline growth stood at over 20 percent, revenue growth in FY17 stood at over 12 percent. Both export sales and local sales registered an incline, by 21 percent and 13 percent, respectively. This was attributed to volume growth, higher demand, and widening doctor coverage. The company has prominent presence in the following segments: cardiovascular, cold and cough, diabetes, infant formula, probiotics and antibiotic. On the other hand, cost of production increased marginally, keeping gross margin flat at close to 39 percent. Net margin, however, improved to 24.5 percent for the year (FY16: 21.8 percent) on the back of a jump in other income that reached over Rs 2.3 billion, and a reduction in taxation expense. The primary source of other income is dividends from subsidiary companies.

Topline continued to grow in FY18, at nearly 18 percent. Both export sales and local sales witnessed a rise, by 33.7 percent and 20 percent, respectively. Segment-wise, the bulk of the revenue is generated through the pharmaceutical division that saw an 18.5 percent increase, while the consumer segment saw a 30.5 growth. On the other hand, owing to the currency devaluation, cost of production rose to consume 65 percent of revenue, up from 61 percent in FY17, due to the reliance of the industry on imports for its raw materials. Therefore, gross margin also fell to 35 percent; however, due to unrelenting support from other income towards the bottomline, net margin was maintained at 24 percent.

Growing by over 14 percent, sales revenue crosses Rs 14 billion in value terms during FY19. Export sales grew by almost 33 percent, while local sales registered an almost 14 percent incline. Currency devaluation continued to eat away profit margins as gross margin further declined to 33.8 percent. While this was still nominal, operating and net margin fell considerably, with the latter at 18 percent. This was the lowest seen since FY15. Other income, although at over Rs 3 billion, made a notably lower share in revenue, combined with finance expense that doubled to almost 3 percent of revenue. Most of the decline in other income was seen in dividend income from Searle Pharmaceuticals (Private) Limited.

Despite the outbreak of Covid-19 and the lockdown that ensued subsequent to it, the company managed to grow its topline by nearly 14 percent. Export sales grew by over 25 percent while local sales grew by over 11 percent. Preceding the lock down situation, there was a lot of stockpiling and panic buying, not just by wholesalers but demand also came from patients, particularly for chronic disease therapies. The higher revenue led to an increase in company’s market share.

On the other hand, the cost of production dropped to 50 percent of revenue. Most of this decline was seen coming from processing charges that were recorded at Rs 485 million, compared to Rs 3.4 billion in the previous year. This was due to the company “discontinuing toll manufacturing services obtained from its wholly owned subsidiary Searle Pharmaceuticals (Private) Limited. So, while this allowed gross margin to improve to 50 percent, the drop in other income to Rs 781 million, compared to over Rs 1 billion consistently each year, led net margin to decline to almost 15 percent- the lowest seen since FY15.

Revenue was mostly flat year on year during 1QFY21 at Rs 4 billion. While gross margin was maintained at roughly 49 percent, operating and net margin due to higher other income. The latter seemed to have resumed previous levels, after dropping drastically in FY20. In the second quarter of FY21, revenue was only marginally higher, keeping gross margin stable at 52 percent. Similar trend was seen in the second quarter as 1QFY21 alone saw Rs 616 million in other income that took net margin to nearly 21 percent for the period.

Majority of the companies in the pharmaceutical sector have seen their revenue growing, more so after the Covid-19 pandemic as consumer perspectives changed for greater spending on healthcare. However, the pandemic did come with its challenges as clinics and OPDs were closed down. The company has several products in the pipeline going through the regulatory approval process, in addition to investments in plant and machinery. Thus, continuous growth seems plausible for Searle.